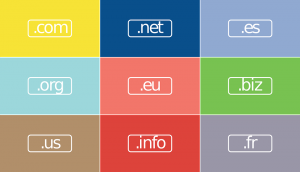 Dot com, .org, .net…what does it all mean?  When you’re trying to choose a domain name, there are so many to choose from, it can be a tad overwhelming.  What’s the difference between .com and .net, anyhow?  And why are they different prices?  The process by which Top Level Domains (.com, .net, etc.) domain names are doled out seems arbitrary – and to a degree, it kind of is – but here’s a short history of the Domain Naming System (DNS) and an explanation of how it actually works.

So, what exactly is a domain?  Domains are basically categories.  When the internet was first developed, every resource on it was placed into one of seven categories (domains) based on purpose:  commercial (.com), education (.edu),  government (.gov), military (.mil), organizations (.org), and network (.net).  Those were the core Top Level Domains (TLD’s).  TLD’s were later on subdivided into generic Top Level Domains (gTLD’s) and sponsored Top Level Domains (sTLD’s).  Generic TLD’s are domains anyone can use; sTLD’s are specialized domains restricted for use by people from a very specific group.  For example, the .uk domain is only available to people who live in the UK.

Domain names are governed by a multinational body known as the Internet Corporation for Assigned Names & Numbers (ICANN).  ICANN controls what domains are available and when, and whether or not the domain is a gTLD or a sTLD.  If a person or organization wants to start a new domain (.mars, for example), he must first apply to ICANN for permission.  If the domain is accepted, the cost to purchase it is just under $200,000 – unless someone else also wants it.  Say both NASA and SpaceX decide to start the .mars domain and apply to ICANN for it.  Once ICANN decides to approve the domain, an auction is held, and the highest bidder wins.  Historically, ICANN has been pretty tightfisted with new domains, but in 2011, the organization voted to end most of its restrictions on the creation of new domains.  At that time, there were just 22 available over the entire internet.  Now there are over 295 million.

At $200K or more a pop for something that only exists in cyberspace, you might imagine the owner of a Top Level Domain name wants to recoup his expenses as quickly as possible.  He does that by selling smaller pieces of his domain to people who want to run their own networks or websites but don’t have an extra $200,000 lying around with which to buy their own TLD.  Those smaller pieces of the TLD are called mid-level or subdomains.  For example, bitcosm.com is a subdomain of the larger .com domain.  The TLD name is .com, and the mid-level domain name is bitcosm.  The cost of a subdomain is set independently by the TLD owner and is solely up to his discretion.  That’s why you can buy a .com domain name for one price, but a .us name for a different price. Some domain names cost as much as $100 or more!

So there you have it: the DNS explained.  As it turns out, while there are some domains that require the buyer to meet certain restrictions, the only difference between a .com and .net domain name is who owns the Top Level Domain and what they feel like charging for a piece of it. A .work domain functions exactly like a .com domain!

Clark writes the weekly Clark's Corner column for Bitcosm. She is fluent in both Common and High Nerdish...mostly.
View all posts by Clark →